How to stop a dog from jumping on the counter

Animals have this natural tendency to hunt for food and snatch any edible item in their sight if it is safe for them to snatch. If you own a puppy, you will understand where this is going. Every dog owner faces this difficult problem caused by their dogs when they jump on the counter to grab the tempting food.

Most owners ponder over this again and again wondering exactly how to stop a dog from jumping on the counter. To prepare counter measures for this problem, you will first have to understand the cause and look at this from your dog’s point of view. Sounds funny right? But the idiom “step into someone’s shoes” is applicable here.

Before thinking of finding ways of how to stop a dog from jumping on the counter answer these questions:

If you are rewarded handsomely for a certain act, will you ever stop doing it? Or when you were a child, could you resist the temptation of chocolates if it was right in front of you. The answer here is most probably no. Similar is the scenario with dogs. They won’t let a chance to grab the abandoned food pass and snatch the savory treat.

The literal term for this habit of a dog is often called “Counter Surfing” and this happens when a dog spots food on the kitchen counter or dining table. They jump and place their paws on the counter to grab the food and run away.

They usually do this unnoticed when you are away. Some rebellious dogs might do this in your presence. Either way, this causes trouble for the owner as the dog can cause a mess out of food, plates, glasses and other things on the counter.

Following are some methods which will tell you how to stop a dog from jumping on the counter:

Prevention is better than Correction

Starting from the point when you bring your new puppy home and start training him for different activities, don’t forget to prevent the counter surfing habit before they start doing it. Monitor the dog and scold it whenever it strolls nearby the kitchen counter or dining table.

Train it in such a way that it never try to reach for the counter and place the paws on it. Always place his food right in front of him on the floor and when he starts following your instructions, reward him for further motivation

No food on counters 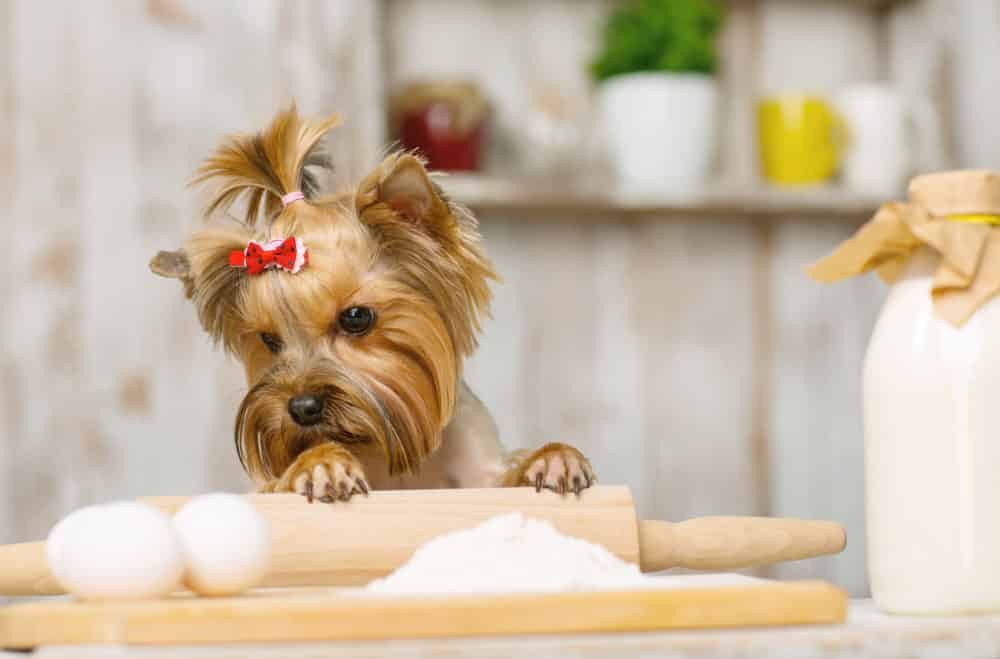 If your pet has developed this bad habit of jumping on the counters, then the first step for putting an end to it is simply by depriving it from the food on the counter.

Why will he ever jump or reach for the counter when there is no food to begin with? Hence, keep your counters and tables clean so that it doesn’t notice anything tempting. Not only food but also remember to put other accessories away and keep it clear as frequent as possible. Food isn’t the only thing they can put in their jaws and run away.

The solutions to the topic “how to stop a dog from jumping on the counter” are pretty simple but people often get worried. Dogs are loyal creatures and they can be tamed despite the fact that they will always be attracted by food. Turn this disadvantage into an advantage. Instruct him to remain on the floor or on the mat.

Conduct several training sessions if necessary. While preparing the food in the kitchen, inspect him by instructing him to sit on the floor. Give him delicious food and treats if he listens to you. If he doesn’t, then punish him lightly for his mischief. Prepare a few command words for example “halt” and say these words with authority whenever you want to stop him from jumping or grabbing food.

Always keep the dog under inspection. Don’t let it go near the food and make sure to keep him well fed. Distract him with other activities to make sure he doesn’t get enough time to jump on the counter to grab the food. Give him stimulating collaborative food, puzzle toys to distract him from grabbing the real food but ensure that all his meals are given to him on time. This will keep him busy both physically and mentally. Take him out for a walk so that he can maintain sane behavior.

Punishing the dog severely for the stealing behavior won’t do any good. If you are losing your temper and can’t keep up with his training then seek expert services. These trainers will make sure that your pet gets rid of the bad habits. Don’t put a dog leash around his neck when trying to stop him from counter surfing.

This will hurt him and make matters worse. Make it habitual for him to eat from his own plate while simultaneously providing him with treats and toys on the floor to chew. By applying this formula, he won’t be going near the counter anytime soon, at least not in your presence if you make him listen to you.

Apply a bit of Reverse Psychology


It’s natural for you to feel exasperated wondering how to stop a dog from jumping on the counter when you are the owner and suffering from this habit of your pet. You have to think outside of the box too sometimes.

If you feel like the dog is doing this deliberately to get your attention, do absolutely nothing. Keep your counter clear and when he jumps on the empty counter, totally ignore him. This will show him that you are paying no heed and the chances are that this habit of his will go away.

Dealing with this habit can be a tough cookie to break. The earlier you start with the dog’s training and the more consistent you are with management and your methods, the better, the chances that it won’t develop this habit further. By implementing the above methods about how to stop a dog from jumping on the counter, you can easily manage your furry pet and live happily ever after.

How to handle aggressive dogs

Dogs are definitely among man’s greatest friends. Though, in some conditions, these animals have the tendency to be violent towards human beings and other living beings as well which is why all dog owners need to learn how to handle aggressive dogs. Since they belong to the canine group, dogs are born with razor like,...

How to handle aggressive dogs

Dogs are definitely among man’s greatest friends. Though, in some conditions, these animals have the tendency to be violent towards human beings and other living beings as well which is why all dog owners need to learn how to handle aggressive dogs. Since they belong to the canine group, dogs are born with razor like, […]

Dog behavior problems can be the source of frustration among dog owners. This makes them feel like giving up on their pets sometimes. These dog behavior problems include aggression, biting, chewing on the leash, digging, separation anxiety, disobedience and many more. Dogs may also start to become playful and ignore their owners completely in certain […]

No products in the cart.